This year, the global gaming market is expected to set a new high as revenue from the US surpasses China’s

According to a new global gaming market report, 2022 will not see the same kind of post-pandemic slowdown seen in other tech industries. This year, revenue is expected to set another record high, and the United States will surpass China in terms of consumer spending.

According to Newzoo’s report, global gaming revenue will reach a record $203.1 billion. In contrast, player numbers will reach an all-time high of 3.09 billion—or nearly 40% of the world’s population.

Looking at individual countries, Newzoo predicts that the United States ($50.5 billion) will surpass China ($50.2 billion) in-game revenue this year. According to the report, this is due to the Asian country’s stricter game regulations; Chinese regulators approved the country’s first video game license in July 2021 last month.

Also read: If you are looking for any special help with assignments, you must click the given link to get more details. 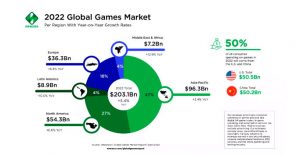 Mobile gaming is also exploding, and it is expected to surpass the $100 billion mark for the first time this year. The $103.5 billion generated by mobile titles would account for more than half of global game revenue.

Consoles are believed to be responsible for a large portion of this year’s non-smartphone growth, with more people purchasing Xbox Series X/S, PS5, and Switch consoles, though Nintendo’s machine may face supply issues later in 2022. Console game revenue is expected to reach $58.6 billion, up 8.4 percent year on year, while PC game revenue is expected to rise 3.2 percent to $38.7 billion.

Gaming appears to be immune to the post-pandemic slowdown, which has seen the share prices of several big tech companies fall, Netflix loses viewers, and websites cut staff.

Also read: An article on how to improve the user experience on the website

Twitter to roll out new features including Mixed-media, Status, and Award

Gucci to accept cryptocurrency payments in several US stores